Celebrate Quinceaneras in our Beautiful Chapel or an Amazing Destination Location in San Diego.

In the Mexican, Puerto Rican, Cuban, Central and South American cultures, the custom can be referred to as a Quince (XV) Años, a quinces, a Quinceanera, a Quinceanero or a Fiesta Rosa.  It is a Hispanic tradition where a family is celebrating a young girl’s transition from childhood into becoming a young woman by celebrating her 15h birthday. It was originally begun to introduce a young lady in society for courtship and marriage. In today’s society it has come to mean a time when  a young lady dedicates and commits her life to the Lord publicly. The Quince Años is a time honored  celebration that remains a cherished cultural tradition.

The Quinceanera celebration traditionally begins with a religious ceremony which can be done in a church or chapel or the hall where the reception or party is going to be held. The festivities include food and music, and in most, a choreographed waltz or dance performed by the Quinceanera and her Court at the reception.

The Quinceanera also can choose special friends to participate in what is called the Court of Honor and are traditionally up to 14 persons in the court, which with the Quinceanera, would total 15 young people. Usually, these young people are her closest friends, her brothers, sisters, cousins – the special people in her life with whom she wants to share in her special day. The Quinceanera’s Court of Honor can be comprised of all young girls (called Dama), all young men (called Chambelán or Escorte or Galán) or a combination of both.

The Quinceanera traditionally wears a ball gown, with her Court dressed in gowns and tuxedos. However, many times just the Quinceanera will wear the ball gown and her court can be less formal. Guests usually receive small tokens, cápias and cerámicas, to commemorate the celebration.

The ceremony itself whether done in a church, chapel, or at the reception will traditionally embrace the spiritual customs of the families religious beliefs, the virtues of morality and taking on social responsibilities as the young woman matures into adulthood.. In essence the focus of the traditions embrace God, the Quinceanera’s family, and her friends while the reception is a celebration much like a wedding reception with food, music and dance.

At the reception, there is always the toast to the Quinceanera, known as the brindis. With decorated Champagne Glasses, the guests are invited to offer their congratulations and best wishes and it generally begins with special words from the parents and special relatives and friends.

Regular office hours are 10-7 and last appointment is 6pm. Please call to make an appointment for your deposit and consultation.
After hours, holiday, and novel days (Christmas Eve, Christmas Day, New Year’s Eve, New Year’s Day, Valentines) are available by request. Please see below for details*. 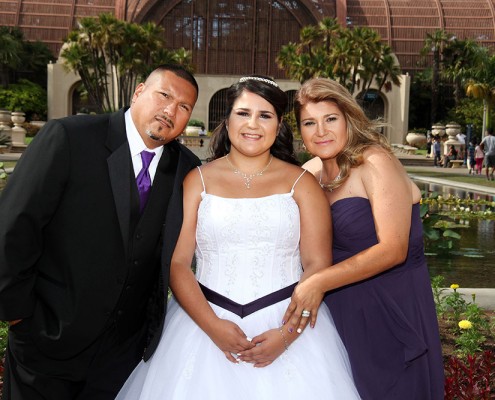 All packages include the Quinceanera and her court 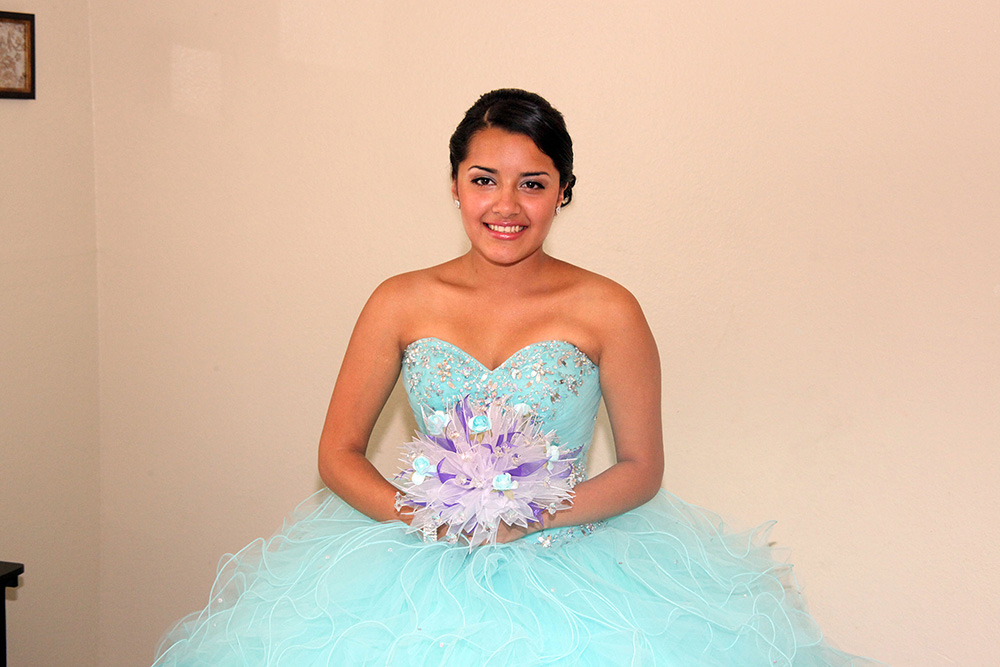 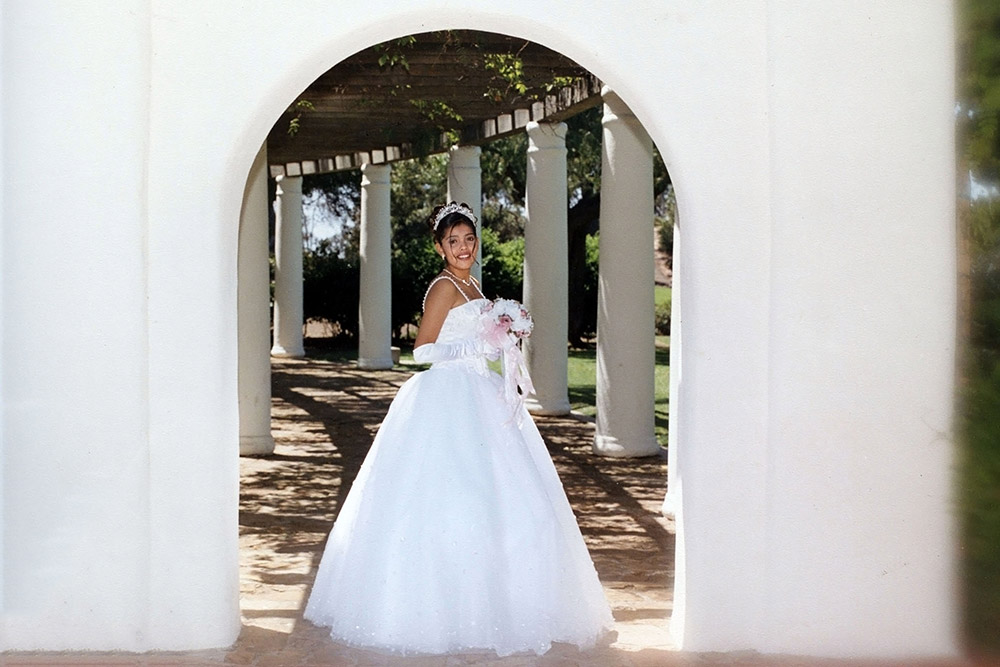 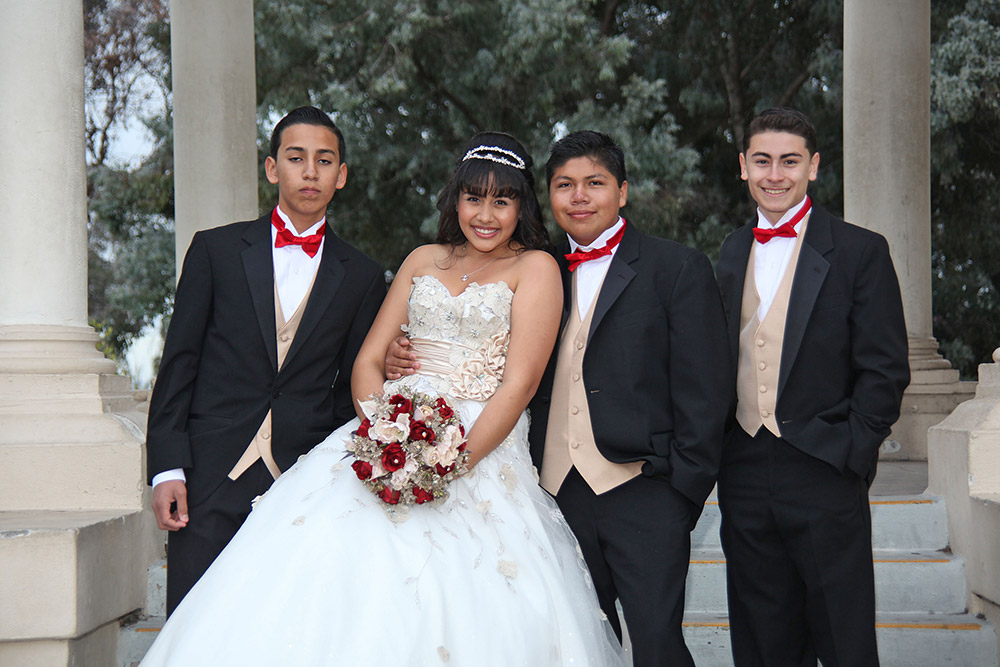 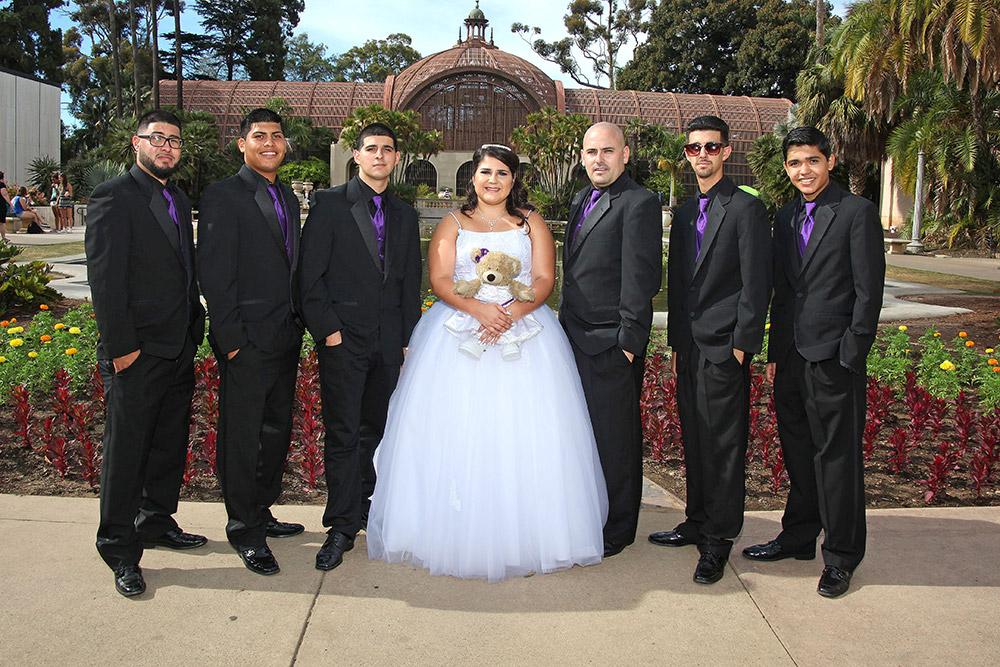 Today’s Quinceaneras ceremonies embrace religious traditions, and the virtues of family and social responsibility The guests are a mixture of family and friends, young and old, from near or far away and they all contribute to making the Quinceanera celebration unique and special, recognizing her journey from childhood to maturity and honoring her with age appropriate gifts.

The Traditional Ceremony Gifts for the Quinceanera are distinctive cultural reminders for the ceremony that embraces the Quinceanera tradition of loyalty to God, family and the community and their significance relates to the Quinceanera’s coming of age into womanhood.. These ceremonial items may include:

Tiara
Denotes a “princess” before God and the world; the ability to triumph over childhood and the ability to face the challenges ahead as a mature young adult. The TIARA also plays a role in the actual Quinceaneras ceremony. It is traditional for the headpiece worn by the Quinceanera to be ceremoniously replaced with the Tiara. The “Crowning” is done either by her parents or the godparents presenting the gift. The Scepter is also presented to the Quinceanera at the same time. This ceremony usually takes place at the reception but can be incorporated as part of the religious ceremony.

Cross or Medal
Signifies faith – in God, in herself, and in her world.

Bible (or Prayer book ) and Rosary
Important resources to keep the Word of God in her life.

Scepter
Symbolizes authority, and more importantly, taking on responsibility for her life verses always depending on others.

Bracelet or Ring
A commitment to moral purity before marriage.

The Last Doll
The last doll is used as part of the ceremony or as decoration and keepsake. The Quinceaneras doll represents the last things of a child now that the Quinceanera will focus on the things of a young woman. In some Hispanic cultures, the cápias (printed ribbons with the Quinceañera’s name and date) are pinned to the doll, and the Quinceanera circulates among her guests, thanking them for their presence and presenting them with a the cápia memento taken from the doll to symbolize leaving childhood things behind, In some family customs the Quinceanera passes on her Last Doll to a younger sibling, cousin, or friend.

Changing of the Shoes
One of the most popular traditions is the changing of the shoes. The father or a favored male relative ceremoniously changes the young girl’s flat shoes to high heels. This is a beautiful symbol of the Quinceañera’s transformation from a young girl into a young woman.

In some Hispanic cultures, the gifts are given to the Quinceanera by “padrinos” (also called godparents or sponsors) specially chosen by the Quinceanera and her family. The padrinos who give the Traditional Ceremony Gifts are formally recognized, and often are part of the procession for either the church, chapel, or reception ceremony, or do the presentation of the gifts for the priest or minister’s blessing.

Consultation with the minister is included in all packages to determine which traditions and gifts you want to incorporate into the ceremony and to discuss all aspects of the service. If you have more than your allotted people the day of Quinceanera the next appropriate package price point will be charged. Special Music can be incorporated upon request.

*After hours, holiday, and novel days (Christmas Eve, Christmas Day, New Year’s Eve, New Year’s Day, Valentines) will incur additional fees. If you change your date, time or location or if you are late for your Quinceanera ceremony additional fees will also be incurred. All fees are non refundable if you cancel your appointment once a deposit is made.

REHEARSAL FEES AT THE CHAPEL 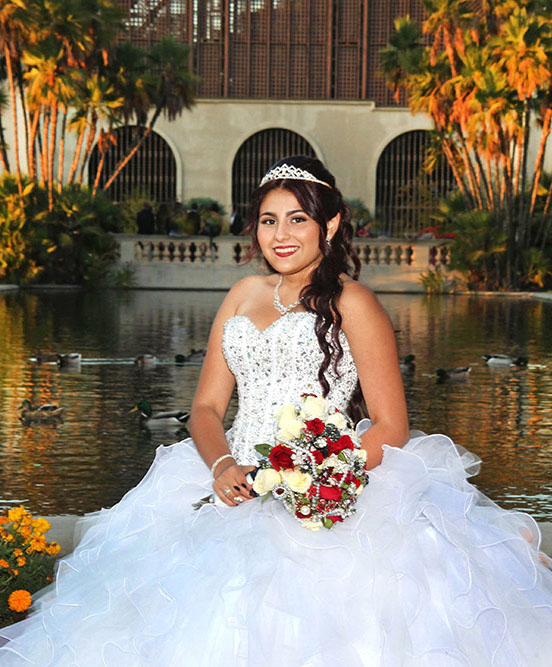